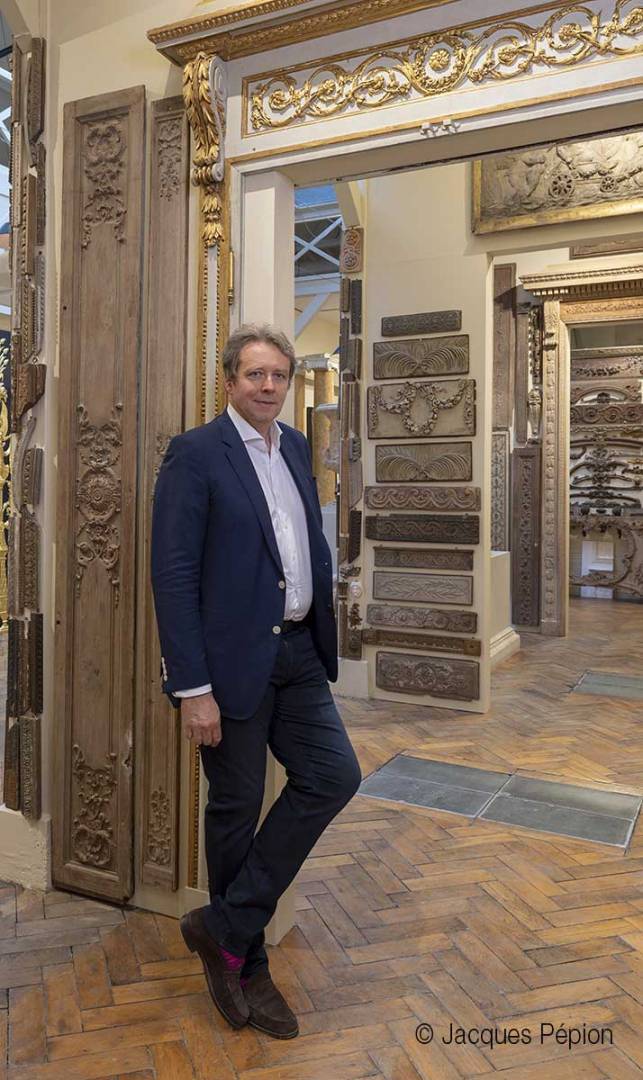 At the head of a company founded in 1875, this lover of beautiful French decor steadfastly maintains the business’s traditional specialisation in antique wood panelling and the reproduction of panelling. By Éric Jansen 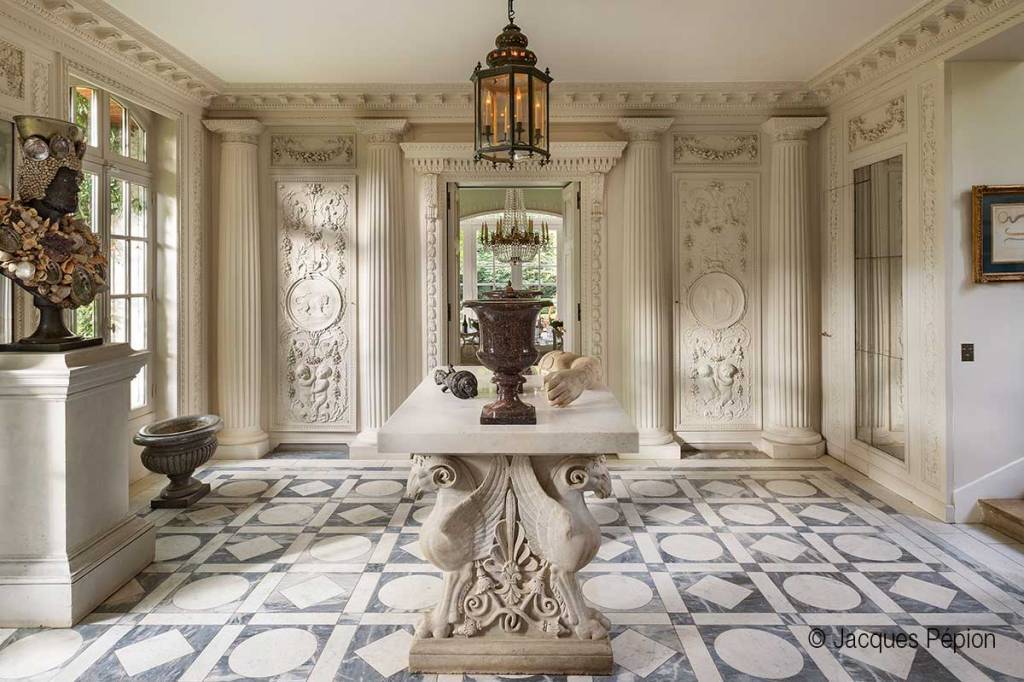 Féau & Cie possesses a unique collection of 17th to 20th century panelling and woodwork including examples made for Madame de Pompadour, sumptuous cornices from the Robert Couturier and Peter Marino are just some of the great interior decorators who have entrusted their projects to Féau & Cie. Today a new generation, among them Pierre Yovanovitch or Jean-Louis Deniot, push open the doors a stone’s throw from Parc Monceau to enter what may appear to resemble Ali Baba’s cave. As Guillaume Féau accompanies his visitors through a succession of rooms, a remarkable collection of carved woodwork, friezes, cornices and capitals never ceases to enthral and inspire… Hôtel de Beauharnais private mansion, decorative elements from the Riviera’s Ephrussi de Rothschild villa and even remarkable Emilio Terry bookcases. Each piece bears witness to its particular period’s unique decorative style. Since 1875, this renowned company has nurtured its expertise, perfected its unique savoir-faire and reinforced its ability to respond to the desires of decorators from across the globe. Even in the 21st century not everyone wants to live between four white walls with run-of-the-mill furnishings… Jacques Garcia, Charles Fournier, one of the most renowned decorators during the Third Republic, started the collection which was further enriched by Raymond Grellou who bought the company in 1917. At the end of the 19th century, numerous chateaux and mansions were dismantled, but fortunately some decorative elements survived. While only the wealthiest clients may indulge in acquiring the originals, others can nonetheless obtain remarkable copies. With the Belle Époque fashion revival, the style in sumptuous residences was neoclassical, neo-rococo, neo-Empire, and panelling was everywhere from Boni de Castellane’s Palais Rose or the Hôtel de Camondo in Paris to the French Riviera and New York. Although the craze continued until the 1950s, post-war modernity dealt it a near fatal blow. In 1963, Guy Féau acquired Raymond Grellou’s stock and premises and, having revived the activity, went on in the 1990’s to entrust it to his son Joël. The latter had cut his teeth with the House of Jansen, considered by many to be the first truly global design firm and for whom Stéphane Boudin, the renowned interior decorator who advised Jackie Kennedy regarding the decoration of the White House, had also worked. In the 1990’s, Guillaume joined his father Joël, and orders piled up. Parisian antique dealers called upon them to create their stand for the Paris Biennale. In New York, art lovers had never ceased to love and want to acquire a slice of great French style. In 2000, Guillaume took over the reins of company, and ever since has constantly undertaken increasingly refined projects. A superb book published by Éditions Rizzoli highlights some twenty sublime interiors. As world-famous interior designer Michael S. Smith remarks in the foreword: “Panelling has a calming effect that allows the mind to refocus.”

Féau & Cie: The Art of Wood Paneling: Boiseries from the 17th Century to today, by Olivier Gabet and Axelle Corty, éditions Rizzoli