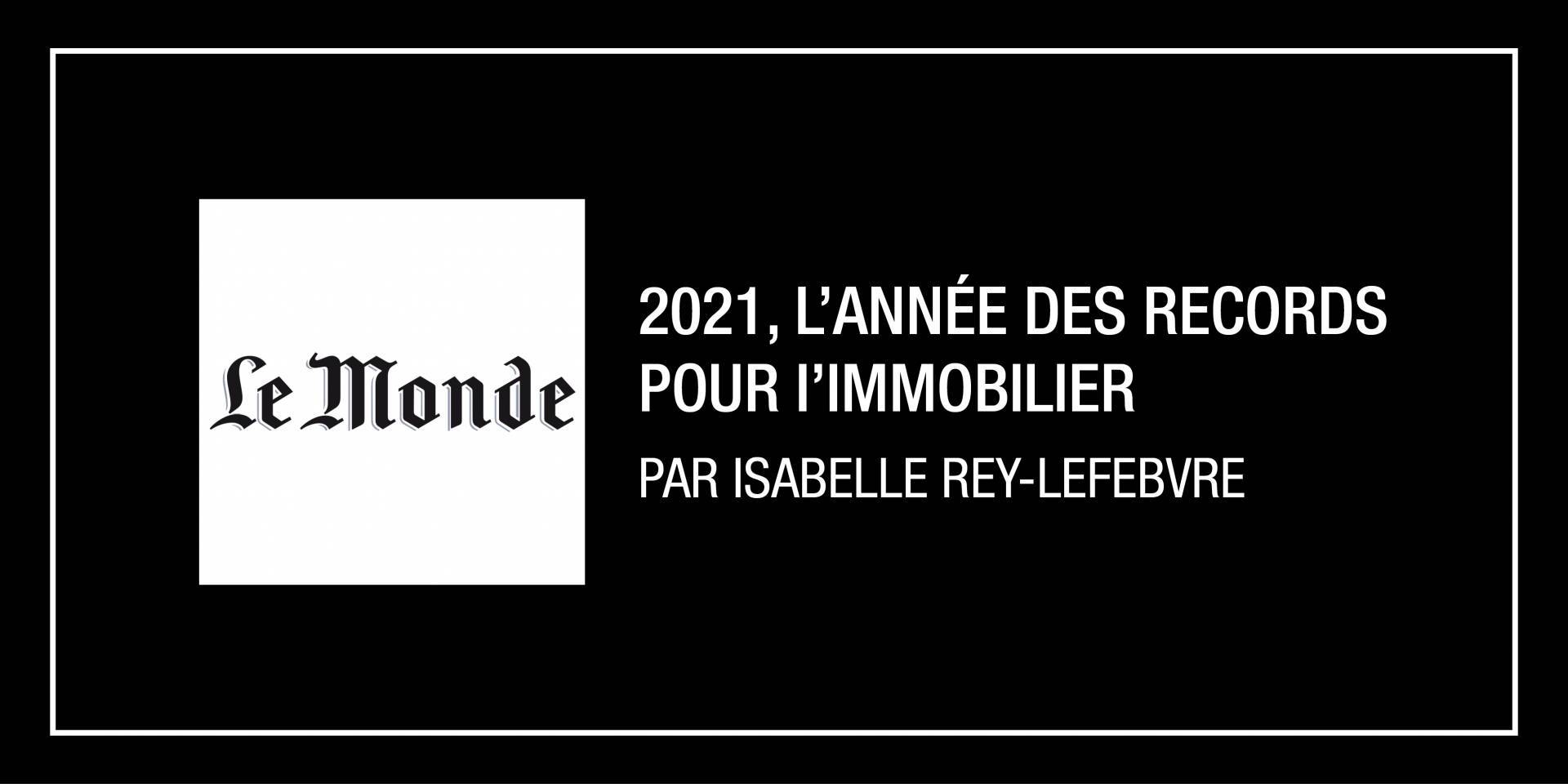 In his economic report dated January 3rd 2022, Laurent Vimont, president of the Century 21 network whose 925 agencies concluded 50,000 transactions over the past year, observes “For the moment, the market is very active after records were broken in 2021". After an atypical year in 2020 penalized by eight weeks of lockdown, record sales indeed, close to 1.2 million and comparable to those achieved in 2019. And sales have never been concluded so rapidly, within on average 80 days in 2021, compared to 91 days just a year ago.

Record average prices too, increasing for the seventh consecutive year by 7.7% for single-family houses to attain 267,524 euro, and by 5.6% for apartments to reach 227,897 euro. Record debt as well as, encouraged by historically low rates averaging 1.13%, borrowers have continued to extend the term of their loans, now standing on average at twenty-one years and nine months. According to the Banque de France, the volume of loans (not counting loan repurchases) grew by 16.7% between November 2020 and October 2021 to reach 225.2 billion euro, compared to 193 billion euro in 2020 and 2019.

Finally, a record number of purchases by investors who, according to Century 21, account for 30.2% of transactions as opposed to 17.4% in 2014. All over France, prices are on the rise, with even double-digit surges on the coast. In the Ile-de-France region, it is in the outer suburbs that the increases are the most striking.

"Single-family houses in the Yvelines department have gone up by 12% in a single year, an unprecedented increase" comments Laurent Vimont. “In the Essonne department, it is apartments that increased by 12.2%, and by 9.9% in the neighbouring Seine-et-Marne department”. Paris however saw its prices drop mainly in the last quarter, down 2.2% with an average of 10,367 euro per square meter. Nonetheless in 2021 buyers paid an average of 511,700 euro for a 49.3 sqm apartment, a loss of 3.7 sqm in a year, in a market that remains dynamic despite a timescale to sell which has lengthened slightly to settle at 72 days on average compared to 62 days in 2020.

It is no surprise that buyers are increasingly from the wealthiest socio-professional categories, with senior executives and successful self-employed professionals claiming 42.5% of the market. Real estate agencies specializing in prestigious Parisian properties are in full swing. The Daniel Féau group announced turnover up by 39% between January 1st and November 25th 2021, boosted by transactions at prices in excess of 3 million euro, up by around 120%.

“The classic 150 sqm bourgeois apartment without a view or a terrace, priced at between 1 and 2 million euro, is proving to be the hardest to sell” notes Charles-Marie Jottras, the group’s CEO, who adds “because our buyers now want an outdoor area and won’t give up on it.” Sales of single-family houses and private mansions with gardens have as a result doubled over the period. Those in retirement are more present than ever in the Parisian market, representing 8.3% of transactions in the capital, but above all investors now account for 31% of sales.

Since 2015 this has been a well-known phenomenon, but it is accelerating: families are leaving the capital. This is backed up by figures that show some 6,000 nursery and primary school students and 900 lower secondary school students fewer at the start of the school year in September 2021, compared to 3,700 less in 2020 and under 3000 before. “Families don't necessarily go far” observes Laurent Vimont. “They hop first to the inner suburbs, then to the outer suburbs, in search of an extra room and the garden or terrace that they lack."

"Three types of migration are happening” according to Jean-Claude Driant, professor at the capital’s école d’urbanisme. “A centrifugal force is pushing inhabitants out of the city centre towards the suburbs; Parisians who can work from home are heading for other large cities such as Marseille, Bordeaux, Nantes or Rennes which are becoming increasingly trendy; and a minority of households have been tempted to settle in little towns or in the countryside."

The arrival of Parisians and the resulting increase in real estate prices is not always warmly welcomed by locals. A number of environmental and regionalist movements in Brittany, for example, are demanding a specific status for residents; on November 20th, 2021 in Bayonne (Pyrénées-Atlantiques), 8,000 demonstrators demanded the right to "live and find accommodation in the Basque Country". 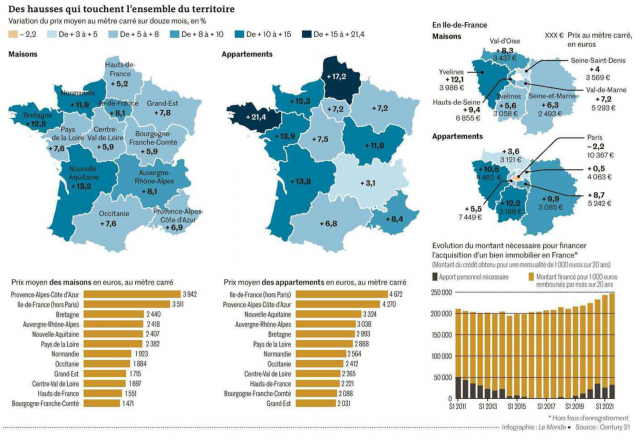 A cap on loans

Laurent Vimont is however somewhat less optimistic about 2022: "If inflation persists and pushes up interest rates, I fear a backfire in the real estate market.” Other observers, in particular mortgage brokers, fear a restriction of credit by the banks which, from January 1st, must imperatively apply HCSF prescriptions which, up to now, were only recommendations: no loan exceeding twenty-five years, and a cap not exceeding 35% of income, even for investors.

However, banks retain the option of exceeding these limits in 20% of cases. "On September 14th the HCSF welcomed the fact that banks are standardizing their practices with, in July 2021, only 20.9% of cases that were not within the strict guidelines" points out Laurent Vimont. "However, purchasing power for real estate is a concern” he adds. “Many buyers, and particularly first-time buyers, are kicked into touch by a rise in prices that low borrowing rates are no longer sufficient to offset. "

According to his calculations, it will now take a 32,153 euro down payment to cover the average price of an acquisition using a 20-year loan and with a monthly reimbursement of 1,000 euro, a significant increase when compared to 2020.

Finally, the renewed appeal for owning a second home is being confirmed, representing 7% of purchases compared to 5% in 2020.